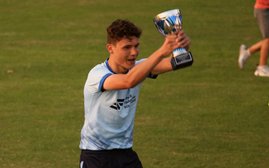 120 players confirmed in six squads for the 2022 event

After a two hour draft night on Thursday, all 120 players have been selected for their squads for the coming season.  Fixtures will be confirmed this weekend for all group matches, but we take a look at the squads who will do battle over the months ahead.

New skipper Kiran Kullar seemed to take a relaxed approach to the selection process, opting to pick some of the younger star players available and then going for experience in his regular player choices.  Nick O'Dell could be a shrewd choice if he is going on holiday on less than his normal 8 occasions over the summer months, while there are plenty of wicket keeping options in the squad with Kullar joined by his brother Arun, the experienced John French, youngster Ross Taylor and veteran Ian Twine.

A strong night for captain Daniel Tyler and the competition's newest franchise.  Tyler went for quality in his star player and junior picks, and character from his regular player selections.  Also made the wisest choice of the evening by securing the services of Gary Carr, which looking at the injury prone names across the rest of the squad was a very shrewd move.  If it clicks this squad will be contenders.

Verdict:  Star player availability could dictate if they make it to Finals Day

Skipper Craig Grote may be relatively new to the competition, but he played a canny game as you would expect from a man appointed by the Chairman (surely the Chairman was not pulling the strings).  Terry Wyatt, Rob White, Scott Fisher, Pete Thompson and the Chairman himself were all selected and all know what is expected from representing the Choice.  Add into that the experience of Billy Wright and Andrew Berry and this is a formidable looking outfit.  Some promising youngsters are also included as well as the spin twins Chapman and Morley.

Verdict: An excellent night for Grote, assembling a squad who will be amongst the favourites

The experienced Anthony Limn also seemed to have a clear plan for the evening, and seemed very happy with his squad after the draft.  Limn went for some solid if un-spectacular batting choices from his regular players and then used his star picks to add some explosive hitting with the likes of Nehal Butt, Ollie White, Tom Daniels and Steve Wright.  Shaff Rahman and Rob Bannister are canny selections and the youngsters all look like good choices, so it was no woner Limn was feeling happy later in the evening.

Verdict: Likely to be amongst the challengers for Finals Day

Skipper Ehsan Afzal ended the night with a solid and well balanced looking squad. Lots of variety with the ball, some solid performers with the bat and plenty of keeping options means the Maestros will be confident of another push for Finals Day. On paper they also look to have the best fielding side of the six franchises which could also make a difference in any tight contests.

Coach Simmons will have seen people's capabilities over the winter during training, and he will no doubt have put this into play with his selections last night.  Alongside this he went for two Whack legends in his star picks, John Curtis and Harry Jenkins, and added Ian Munn to solidify the batting.  Some strong youngsters and some experienced all rounders mean this side will surprise a few others as the season goes on.